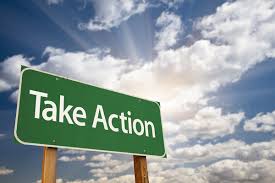 ‘When all is said and done, more is said than done’

This one sentence all too often characterizes too many peoples attitude to action. Whether the failure to act is through fear of failure, or fear of success, or inertia or simply unavailability of time, all too often what is not allowing people to reach with their dreams, to connect with their purpose, their True essence, is lack of action.

It is hard to Act. It requires a huge amount of effort. Sometimes in the face of a good deal of adversity and often involving going beyond our comfort zones, however without action there can be no reward.

I am a True believer that silencing the mind and meditating allows goodness come your way, I sincerely believe our words and our thoughts strongly influence what we attract into our Lives, but I also believe that without Action that the Universe cannot manifest your dreams for you.
You can visualize all you want about being offered your dream job………but unless you actually apply for that dream job you are making the Universe’s job a lot tougher! Plus why would the Universe go out of His or Her way to manifest something for you, when He truly doesn’t even know how serious you are anyway. Unless you take action in the direction you want, the Universe cannot know if you truly want it!

Of course, it takes courage to act and it takes effort. Fear of failing leads people to never begin, or to stop and settle without continuing their movement forward, but as the world famous basketball player, Michael Jordan, once famously said:

“I’ve missed more than 9000 shots in my career. I’ve lost almost 300 games. 26 times, I’ve been trusted to take the game winning shot and missed. I’ve failed over and over and over again in my life. And that is why I succeed!” It is important to overcome inertia and fear of failing.

From now on, stop fearing potential failure, since failing is a part of succeeding. It is true that you cannot fail if you don’t try, but there is no joy in standing still. Just as ships can not sink if they stay in harbor, but they were built to sail, so were you. You are built to sail!

“The secret of getting ahead is getting started.” (Mark Twain)

And as Dr Martin Luther King once said: “You don’t have to see the whole staircase, just take the first step.” He recommended taking the first step ‘in faith’ so go ahead and take that first step. And once you get started remember to keep visualizing success. It’s been said winners visualize the rewards of success, while losers visualize the penalties of failure. Make sure when you Act you continue to focus your mind more on success than failure. And remember as Conrad Hilton, the founder of the Hilton hotels, said “Success seems to be connected with action. Successful people keep moving. They make mistakes but don’t quit.”

And remember, as Mother Teresa said “God doesn’t require us to succeed, he only requires that you try.” But in that trying He will make you succeed.
Action

I will conclude with a comment from Martin Luther King Jr: “If you can’t fly then run, if you can’t run then walk, if you can’t walk then crawl, but whatever you do you have to keep moving forward” and that is the key to Action.

Keep moving forward, keep walking, even crawl if you need to, but take that first step in faith. Without action there can be no reward, as the scholar and philosopher Confucius once said: “It does not matter how slowly you go as long as you do not stop.”
With love and light x